December: Coming to a theatre near you 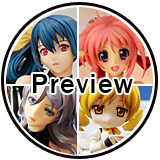 Once again, the time has come. The time to curl up with some hot cocoa and seriously contemplate the future. Will we que sera our way through life, or will we wrestle it to the ground? Just what does tomorrow bring? The ponderance of times to come is a taxing process. The future is mysterious and shrouded in uncertainty. It's a scary, scary place out there. Fortunately, Poke the Merch, knows exactly what to expect.

Just what do we have for December? What are we gleefully squealing about in the depths of the night (where no one can hear or view our shame)? Considering it's the end of the world, December is a very important month. It's the month of goodbyes and endings, and more importantly, the month of extreme sales. Here at Poke the Merch, we're excited. We're like little ions all vibrating in the vast dark emptiness of atomic space. Beautiful December, just what material gifts will you bestow upon our ever open arms? 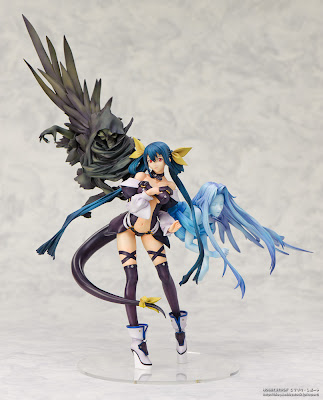 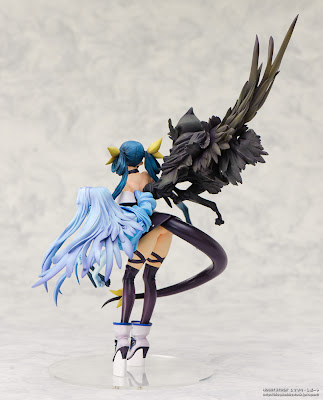 Jenn: I made a mistake. I made a really big mistake. I missed Dizzy's preorder! How could I have missed her preorder?! She's glorious and sexy and I managed to slip up.

Suich: Yes, her wings are absolutely gorgeous, and she does have quite the body!  How can you resist this unique design?!  You can tell from the stock photos that Alter put in a lot of detail.  It's just a really pricey figure...

Jenn: At over $100 Canadian, I thought long and hard on her. Yes, she's beautiful in every possible way, but was I really willing to pay that much for her? After all, she's only 1/8. I thought hard and forced myself not to preorder her. It was the toughest thing I've done in a long time. You won't believe how many times I came close to pressing "confirm order" only to forcibly tear myself away from the computer, shed and tear, and rock in a corner.

Suich: As beautiful as Dizzy is, I can't justify paying $100.00 + for a character I know so little about.  I can understand why Alter would do a re-release though.

Jenn: I regret missing her preorder now more than ever. If anything, I'll snatch her when she releases. I can't resist those glorious wings any longer. I might just explode.

Suich: So look out for her in December!  If you want her, you might have to fight Jenn first.  Good luck! 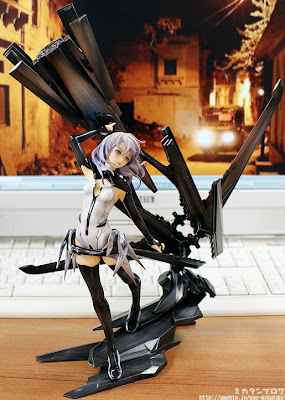 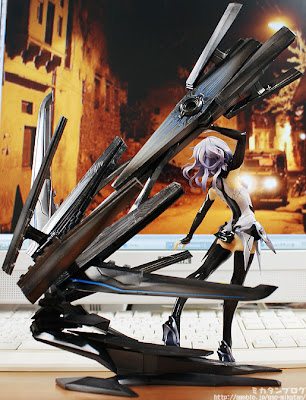 Jenn: I MUST HAVE IT.

Suich: I know you must.

Jenn: Lacia's design caught me immediately. Not only is she designed by Redjuice (one of my favourite artists ever), she's toting what appears to be an enormous mechanical crossbow. Enormous weaponry and sexy girls. Can it get any better than that? If the crossbow turns out as detailed as it looks in promo-shots, Lacia might even challenge Gwen as my favourite figure ever.

Suich: Redjuice's works are always impressive, so it's no wonder there are many figures based off his designs. Lacia has many details thanks to her weapons.  My hope is that Good Smile Company makes this figure well.  Like, really well, considering she's an exclusive figure.

Jenn: Her outfit reminds me of Miku Append's, and by a little I actually mean a lot. Then again, you can't really go wrong with the girl-in-tight-body-suit theme. There's something very sleek and futuristic about Lacia that I find immensely attractive.

Suich: The back part sort of reminds me of a Gundam.  Like their wings or their dragoons, except prettier.  The ones on Lacia has style, which earns a thumbs up from me.

Jenn: There's been some complaint about her blank facial expression. I don't see what they're talking about. Blank? Her face looks blank? All I see is cold hard death. That's not blankness, friends, that's an assassin's calculated stare. Being from a series called "Beatless" I don't expect her to look upbeat in the first place.

Suich: I see a bit of a robotic look in her.  I wouldn't call it a complaint though, just an observation.  It suits her with all the weapons in the back.  I don't think an upbeat expression accompanied by several blades would mix well together (unless the character was a lunatic). 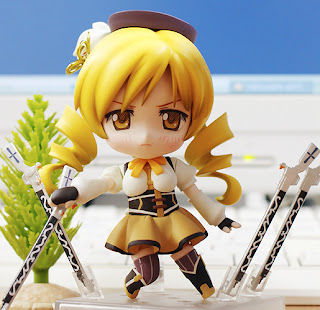 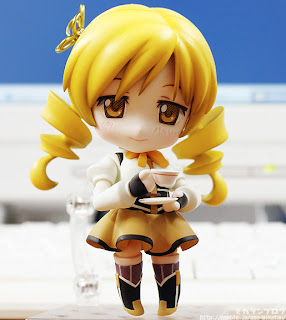 
Jenn: Mami doesn't quite have the same appeal to me as Homura. Her character strikes me as unstable and naive compared to Homura's steel-hard, anti-deterministic grit. To me, her death was almost merciful. She died in ignorance, her sense of righteousness intact, blissfully decieved right till the end. When faced with the truth in an alternate timeline, she freaks and turns on her teammates. She's no Homura, definitely not, but I admit, there's some tragic grace in her character that I really like. The typical magical girl, compelled by moral duty, destroyed, almost necessarily, by the pressures of genre deconstruction. Truly horrific. Like the death of childhood itself. I love it.

Suich: I thought her fighting style was pretty unique for a magical girl.  Then again, I loved how many guns she produced and fired off in battle.  As for her character...well, I wasn't too interested in her.  Maybe because I only got to know her a bit in a few episodes before she disappeared.  She did have a bit of elegance when she fought, even with the POW and the BAM. Also...that 12-year old girl sure liked her tea.

Jenn: I admit, I want to buy Mami just to display her with no head. I've never been fond of her sort of character (you know, tea-sipping, sort of British, goody-goody) but her death as symbolism of "the end" of traditional magical girl tropes is one of the most glorious moments I've ever witnessed in any show.

Suich: Her overall magical girl design was one of my favourites in the series. Her outfit was really elegant compared to the others.  I'm with Jenn on the hair piece bit as well.  It's definitely my favourite feature on Mami.

Jenn: Oh, and I like her guns. It makes no sense to just shoot them once, but I assumed they were the type to jam after just one shot. You know, like those Ross rifles in trench warfare. I'm also delighted they included Charlotte. GSC went there. They so went there.

Suich: Mami will never be able to escape from Charlotte...no matter where she goes. Poor thing. They are forever bound together.  As for the guns, I think they would be great props for other nendoroids.  You could totally have awesome battles/face-offs with more weapons!

Pre-Order?
Jenn: No, but again, the urge to buy her after she releases is high
Suich: If she shows up at a lower price, perhaps, but no pre-order for me 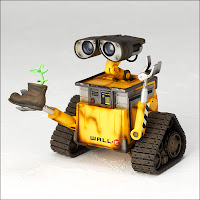 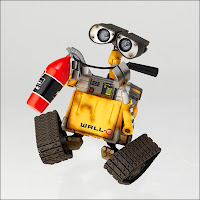 Suich: Wall-E is the robot you want to hug.  I think it's great that Revoltech is doing Wall-E.  They did really well with Professor Layton after all.

Jenn: I loved Wall-E as a movie. The inner environmentalist in me clapped like an amused child the entire time. Sure, the message was a little heavy-handed at times, but it still ranks as one of my favourite animated movies ever. He's such an adorable little nerd robot.

Suich: Judging from the stock photos, it looks like Wall-E comes with some neat little attachments.  They certainly suit him as he's a curious little robot.  Also, if you've seen the movie the shoe plant is definitely an important piece.

Jenn: At 2400 yen, he's expensive for something that can sit in the palm of my hand (Oh man, now I want him more). I would definitely pre-order him if he came with an Eve, but since he doesn't, I'm not sure I can justify spending that much on him.

Suich: I'm not particularly interested in picking this little guy up.  I enjoyed Wall-E but I don't think I ever found myself interested in collecting Pixar toys.  Also, I agree with Jenn. I don't think I'm willing to pay 2400 yen for something so small unless it was from a series (game) I absolutely love. 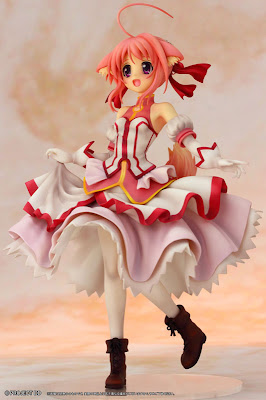 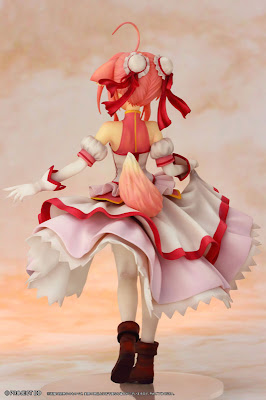 Jenn: Dog Days is a really...special anime. I admit I haven't ever finished it, and Millhiore isn't exactly the most interesting character, but that's never stopped me from appreciating a good figure before.

Suich: I haven't actually watched the anime but I did think that Millhiore was cute when I first saw her figure.  I particularly like that little flowy dress.

Jenn: She's cute, if anything, and looks relatively detailed. Now, it seems only an idiot would prefer this figure to Good Smile Company's. After all, Griffin Enterprises isn't well known for their quality control (or diverse faces), and their products almost never look as good in real life as they do in promo shots. However, there are a few key points that must be examined when comparing the two figures. One, Griffin Enterprises' Millhiore has an extra layer of dress, giving her clothes a fuller appearance. Two, Griffin's Millhiore doesn't have the god awful seam line in her hair. Three, Griffin's Milhiore has more detail in her hair and tail. On the other hand, GSC's Milhiore boasts better movement, and a cuter face, and GSC is renouned for quality. In the end, they're really quite evenly matched in my opinion.

Suich: I think if I'm going to pick up a bigger figure, I would like it to be all high quality.  I admit I love the details put into making the dress look flowy.  It's actually my favourite aspect of this figure (for Griffin).  The overall look is better for GSC because the dress is fine and the face actually looks quite nice.  The painfully obvious seam line wasn't necessary though.  In terms of quality, I still would give the medal to GSC. 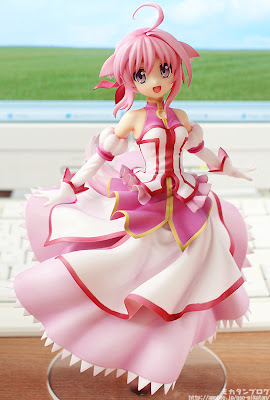 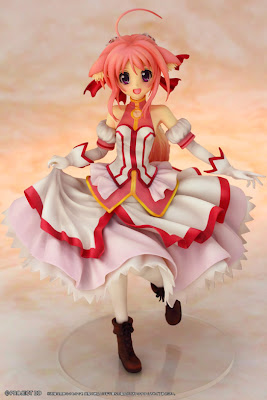 Jenn: Even with both Millhiore's coming out, I'm not sure I would order either. After all, she's not spectacular. She's just kind of cute. Maybe I'll grab her if one of them gets dumped in the bargain bin.

Suich: She's cute but unfortunately for her, there are other figures I'm currently interested in.


Pre-Order?
Jenn: No, knowing Griffin, I want to see actual pictures of her before making any sort of commitment
Suich: Nah

Well, that concludes our short preview of the December releases.  Are you all ready to shop for figures? Hopefully these give you an idea of what you may or may not want to order before 2012.  As you can see, there are quite a few lovely choices for December, but what's in store for January?  You'll have to wait and see in our next preview!  Maybe there will be more books, more epic figures, more adorable little nendos!  Excited?  Well, join us next time in our third showing...January!: The Dreaded One.