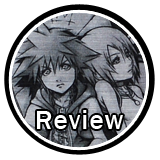 Ah, Kingdom Hearts.  I can't help but adore this series no matter how many games are released, or how ridiculous the story gets.  I remember loving the original Kingdom Hearts back in the old days.  Once the second game came out I developed an obsession with collecting merch from the series.  I even managed to pick up the Kingdom Hearts – Final Mix Platinum Edition while I was in Japan visiting my sister, and that’s what we’ll be looking at in this review.  Since Kingdom Hearts HD 1.5 Remix just came out, I figured why don’t we take a look at the first Kingdom Hearts special edition?


I picked this lovely box set up before I discovered reasonably priced proxies over the internet.  Many years ago, I knew this set existed and, at the time, sellers were charging approximately 100.00 on eBay for it.  So when I saw it in a used game shop in Japan for 4900 yen, I picked it off the shelf, grinned, and purchased it while my sister just smiled and shook her head. 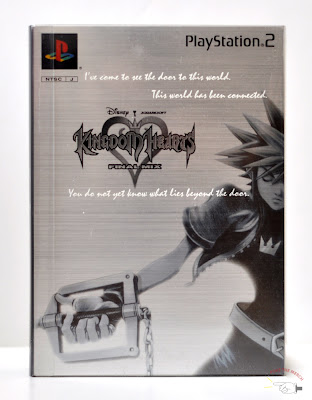 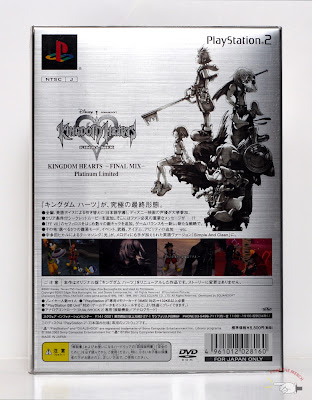 The box itself is glossy and has a nice silvery shine to it when it's in sitting under good lighting.  The illustration Square Enix printed on the box makes Sora look really mature and much older than his fourteen-year-old self in Kingdom Hearts I.  It’s actually very fitting when you consider the heavy responsibilities placed on Sora’s shoulders.  He needs to save his friends, save all the broken worlds, fight countless Heartless creatures, and then some.   Plus, let’s face it, the series gradually becomes darker and more depressing.  Seven titles have been released so far, minus the final mix editions, and the storyline is just outrageous at this point. So yes, taking all that into consideration, the illustration is very fitting for the Kingdom Hearts series. 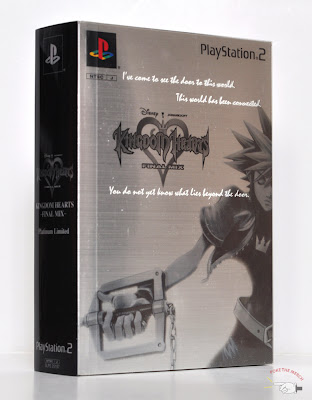 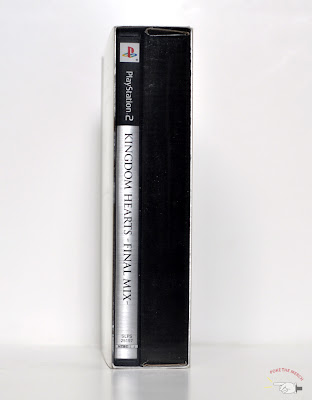 The box is quite thick and sturdy, and it comes with a nice plastic sleeve to prevent the contents from falling out.  The sleeve also prevents the usual wear and tear boxes get when they're left on a shelf for a long period of time. There are also a couple of nice quotes printed on top.


For those of you who are interested, the quotes are:
"I've come to see the door to this world."
"This world has been connected."
"You do not know what lies beyond the door." 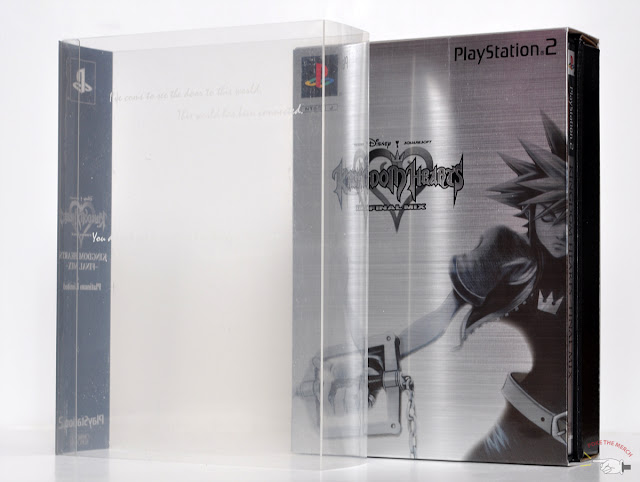 Inside the box you’ll find your copy of Kingdom Hearts – Final Mix and another box housing all your bonus items.  The boxart is black and white for the Kingdom Hearts – Final Mix Platinum Edition, while the regular edition is in full colour.  My guess is that it’s meant to match the outer Final Mix Platinum Edition box since it also has a silvery shine to it.  Both are equally beautiful and shiny in my opinion. The colours are warm and soft on the regular cover while the monochromatic scheme of the other just looks beautiful as a whole.  It also helps the coloured logo stand out more. 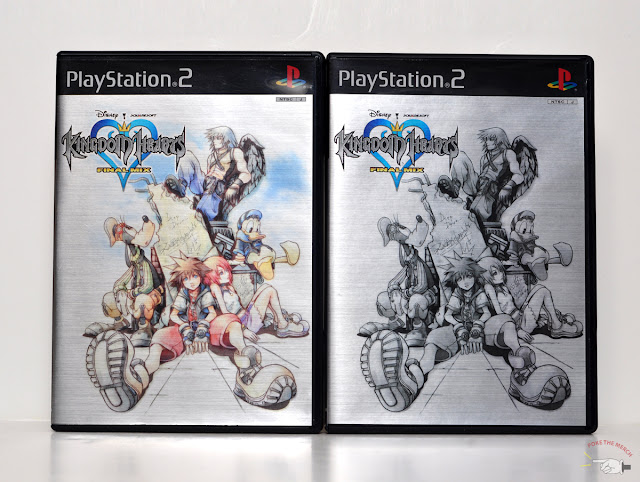 The bonus box includes a small handful of items which fans may or may not find appealing or worth their money.  I for one don’t really care all that much for calendars unless they have never-before-seen illustrations.  Calendars only last a year anyway, so they’re rather pointless in my opinion.  Heck, I bought this special edition set years after it was released in Japan.  I suppose the nice thing about it is that it is packed in a clear crystal case, which also doubles as a stand to display your pictures, assuming you want to show off a 2003 calendar in the year 2013.  Some fans may also like the fact that the calendar cards also work as postcards.  They literally have “postcard” printed on the back, so once you’re done with the calendar or you feel you don’t want them anymore, you can send them to your friends. 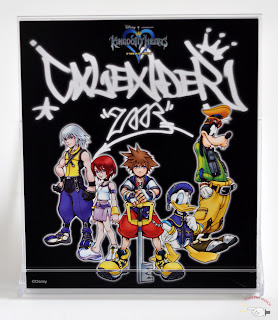 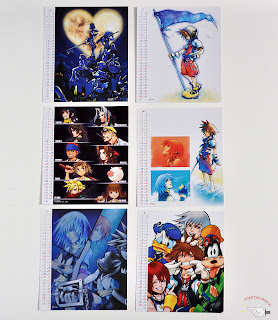 A single sheet of stickers is also included in the box set.  There’s nothing particularly special about any of the stickers as they’re just cut-out busts of the main characters’ concept art from the original Kingdom Hearts game. I'm not too impressed with the stickers showing off the title "Kingdom Hearts Final Mix" either.  Two of the three look Photoshopped, but I suppose I can appreciate the one at the bottom right corner.  I certainly like the style of it.  Plus, it stands out from the other two. 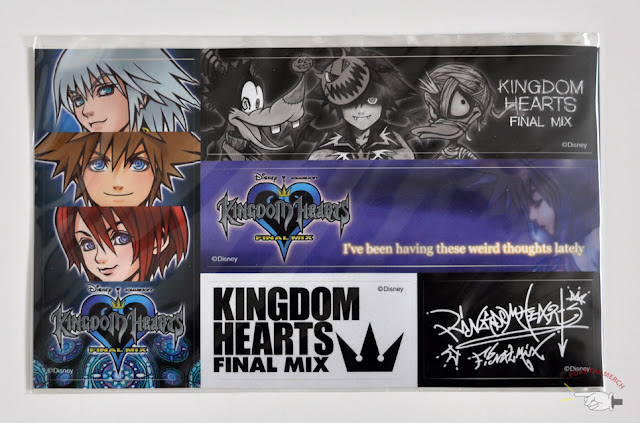 Next we have these neat buttons that scream The World Ends with You / Subarashiki Kono Sekai.   They've got that neat graffiti look to them which gives them a nice edge. I for one love that game so the style really appealed to me.  They're nice to have on bags, I suppose, or in my friend's case, curtains.  But they're really just simple buttons in the end. 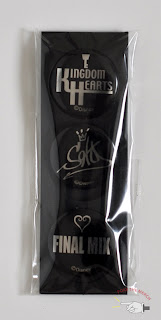 The best item inside this box is the Sora mini figure.  You won’t find this little guy anywhere else and you can't exactly make him from scratch!  He’s surprisingly flexible which allows you to pose him the way you want. 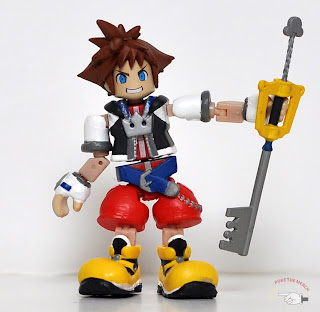 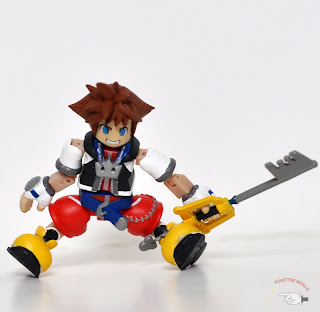 If you tilt his head a little too much, he looks like a bit of a creeper, but I blame that grin of his.  It looks like he might do something evil rather than good, but hey, I guess Sora needs that sometimes.  Saving numerous worlds can be pretty damn stressful after all.  Frankly I'm surprised he hasn't cracked yet.

As great as this Sora figure is, he's cursed with a shoddy paint job, especially around the hands.  He's a bit flimsy as well, but that's to be expected of a product of Square Enix.  If you ever get your hands on him, don't grow frantic when his limbs suddenly fall off.  That's actually normal.  It's quite easy to piece him back together, and I'm incredibly grateful for that.  If any of you have ever read any of my Kingdom Hearts Formation Arts reviews, you would understand just how bad Square Enix's figures can be. Unlike the Sora mini figure here, if pieces of the Formation Arts figures fall off, it's quite difficult to put them back together.  They bring back bitter memories of me hurting my fingers while forcing the pieces to fit together.

I don't recommend holding high expectations for this little Sora figure though, because Square Enix generally produces poor quality merch.  We’re in the year 2013 and I still believe their Formation Arts figures can draw blood.

Despite the flaws, I still have a soft spot for this figure.  Perhaps it's because I absolutely loved playing with Legos, Duplos, and figures when I was a kid.  This Sora figure just reminds me of the good times.  I would have hours of fun just building houses out of blocks.  Maybe if I still had my Lego pieces on me I'd build Sora a little castle.  This kid deserves one. 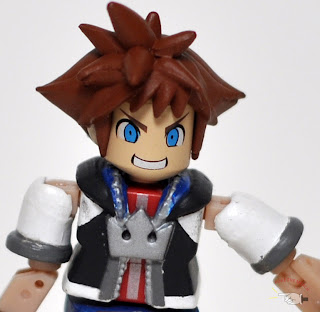 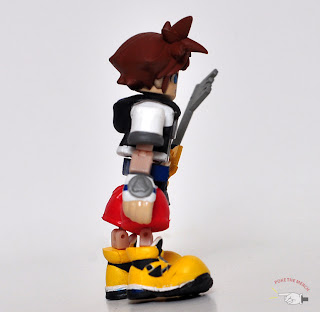 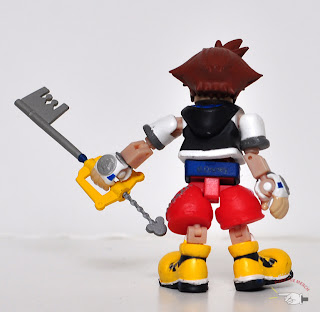 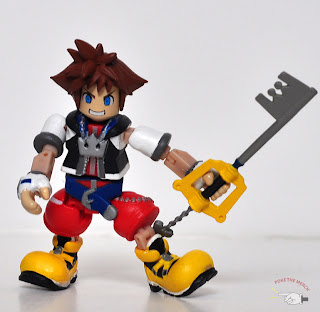 As for the game itself, I must say there are a lot of nice features that weren't included in the original Kingdom Hearts game.  Unfortunately, some of those features were also missing in the English version.  We've got bonus scenes, extra boss battles, and more abilities.  I mean, it's a shame Square couldn't fit it all in time for the initial release, but at least you're getting more for buying the Platinum edition, right? 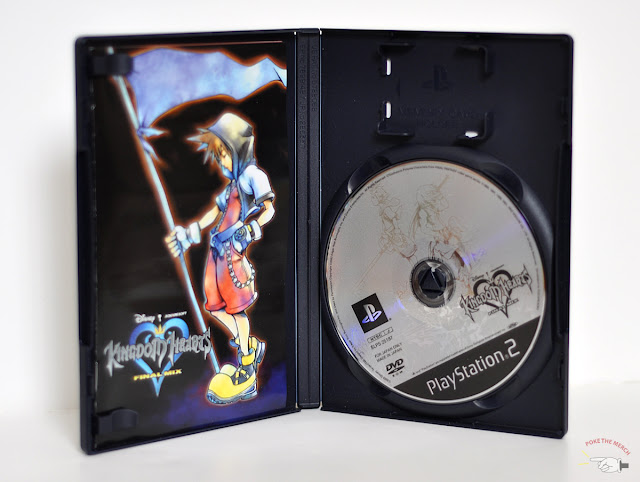 The best part about Kingdom Hearts – Final Mix, in my opinion, is the secret movie at the end after you’ve completed Jiminy’s journal and sealed all the Keyholes.  What a fabulous reward it is!  I personally never finished the game but I have seen the movie and it is beautiful.  Once I acquire my copy of Kingdom Hearts HD 1.5 Remix I am so gunning for that ending.  All for that glorious HD ending.  I’ll probably suffer a lot on the way, what with the watered down attacks and abilities, but hey, it’s worth it for Kingdom Hearts!  It’s a wonder how much Square Enix has improved on the controls in the HD version.  In the original Kingdom Hearts game there were very few commands.  It was quite challenging at times, especially with the wonky camera we had.


As a big fan of the Kingdom Hearts series, I’m happy I have this lovely box set in my collection.  Some fans may find that it isn’t worth shelling out extra money for a sticker sheet, an outdated calendar/postcard set, some buttons, and a little Sora figure, but some may enjoy those bonuses as well.  I expect Kingdom Hearts fans to want this in their collection. 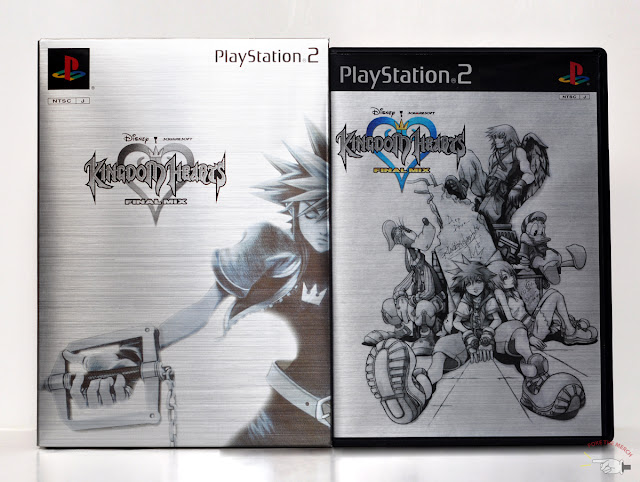 It's a shame Square Enix hasn't made any nice Kingdom Hearts collector's editions ever since this one.  I mean, Kingdom Hearts II - Final Mix came with a sleeve and a nice pre-order bonus (a hard cover book), but that's not really a special edition.  I don't count the Kingdom Hearts PSP, DSi, and 3DS editions because there aren't any extra items that come with the systems.  For the next Kingdom Hearts Final Mix release I truly hope they include some nice items.

If anyone is interested in picking up a copy of the Kingdom Hearts - Final Mix Platinum Edition, the prices are quite reasonable on Yahoo Auctions. There were only a few available last time I checked.  I recommend using a proxy that doesn’t charge too much.

So are you guys ready to play Kingdom Hearts HD 1.5 Remix?  I sure am!

Box: 9/10 (Love the shiny silver and the illustration of Sora)
Bonus items: 6/10 (It’s really only worth purchasing for the Sora mini figure, but I also like the buttons)
Game: 8.5/10 (It’s a classic game to me and I absolutely love the secret ending and bonus scenes in Final Mix)