I've been a fan of the Tales of series for a while now, and it's hard to believe they're celebrating their 20th anniversary.  I suppose that means a plethora of new Tales of merchandise will be available by the end of 2015.  The more recent games have been lacking in some areas, but overall they're pretty fun.  I found myself liking the majority of character designs and artwork as well. When it was announced for pre-order, I ended up grabbing this gorgeous art book showing off Mutsumi Inomata's Tales of series designs!
I'll admit that I wasn't a big fan of Mutsumi's style back in the day.  I remember looking at the earlier Tales of games like Tales of Destiny and Tales of Eternia feeling less drawn to the artwork.  This is most likely because I was more exposed to Kosuke Fujishima's work, having played Tales of Phantasia, Tales of Symphonia, and Tales of the Abyss during the earlier years.  The first Tales of game I played was Tales of Symphonia, and it was the coverart for the GameCube box that drew me to the game.  I never got to play Tales of Destiny or Eternia back in the day because I never had a Playstation 1, but I own Tales of Destiny R and Tales of Eternia for the PSP so I can happily say I'm grateful for remakes and ports.
Now that I've seen her work for the later Tales of games such as Tales of Hearts R, Tales of Graces F, Xillia, Xillia 2 and Zestiria, I find myself really liking some of Inomata's designs.  Let's dive into the book now, shall we? 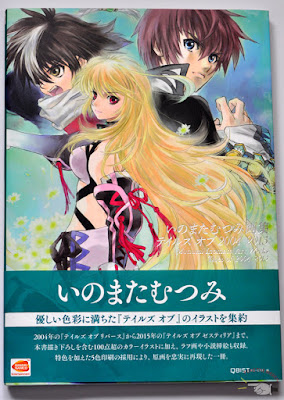 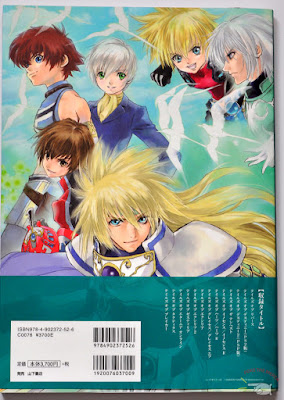 The "Mutsumi Inomata Art Works for Tales of 2004 - 2015" is a collection of artwork Inomata did for the games that were released during these last fourteen years.  So this book includes illustrations and concept work for Tales of Rebirth, Tales of Destiny R, Tales of Destiny 2 (PSP) Tales of the Tempest, Tales of Innocence, Tales of Hearts (R), Tales of Graces (F), Tales of Xillia, Tales of Xillia 2, and Tales of Zestiria.  That's quite a few games, right?  That's why this book is quite meaty.
Having flipped through the book a few times, I can say that there's a lot of white space.  About half of the illustrations in this book are high quality, full body shots of the main casts of each game.  The other half are very colourful art pieces.  They're mostly promotional works or cover pieces for the games and their light novels.  Some sections will have short comments from Inomata herself, and there are a few pages in the back that show off rough sketches and novel illustrations.

Although there's a lot of white space, I will give QBist props for not shrinking any of the main illustrations.  More often than not, I'll buy an artbook and for some reason, the publishers or layout artists feel the need to shrink really nice images.  It can be difficult to enjoy pictures the size of thumbnails. 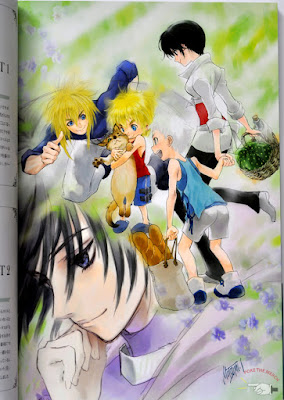 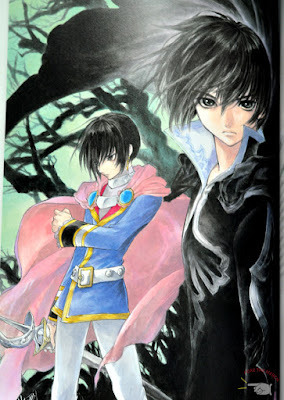 Right off the bat, we have a couple of lovely bonus pieces for Tales of Destiny and Tales of Destiny 2, which I'm sure fans will absolutely love.  Leon/Lion fans especially. The game with the most art work would be Tales of Destiny, which should come as a surprise to no one since that's the second Tales of game in the series, and it's also the first one Inomata made artwork for.  Not to mention it had a nice PS2 remake (Tales of Destiny R).

In any case, both illustrations are gorgeous and colourful at the same time and to me it also reflects how fond Inomata is of Destiny.  Or...it just shows how popular Leon/Lion is. 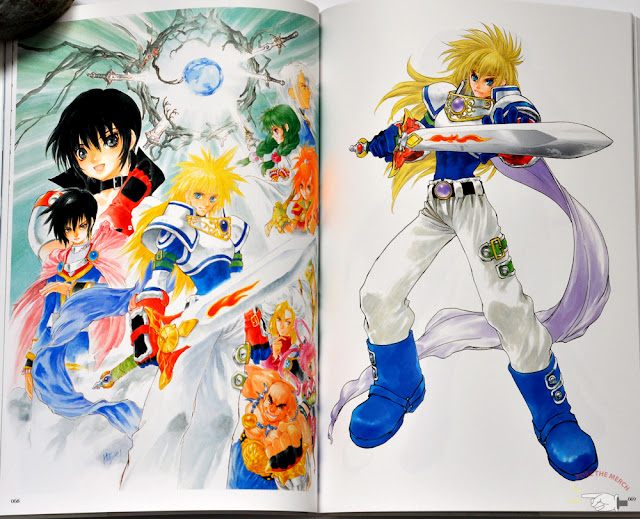 The book is put together in chronological order from when the games were released.  Tales of Rebirth (for the PS2) is the first to show up in the art book because it was released back in 2004.  Although I never played Tales of Rebirth, I found myself drawn to the soft pastel-coloured illustrations in this book.  I also want to note that both Rebirth and Destiny R each have about 20 - 25 pages of gorgeous artwork. They're a mix of promotional artwork, game covers, and light novel covers, so we have quite a few pieces. I definitely can't say the same about the other games. 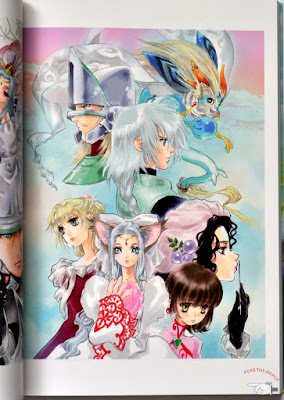 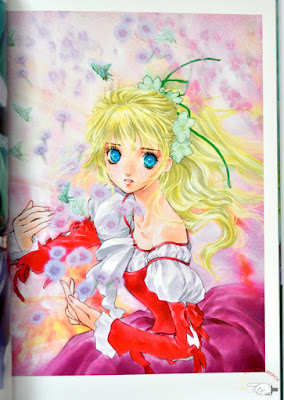 After you pass the Rebirth and Destiny R sections, you can expect a lot of character art.  Each game has a few really colourful pieces and then they follow up with approximately 6 - 10 character pieces.  Tales of Destiny 2 appears to be the exception, because there is only one piece of artwork for this game if you exclude the bonus piece at the beginning of the book.  It's really just the cover art used for the PSP game, which in my opinion, seems a little sad. 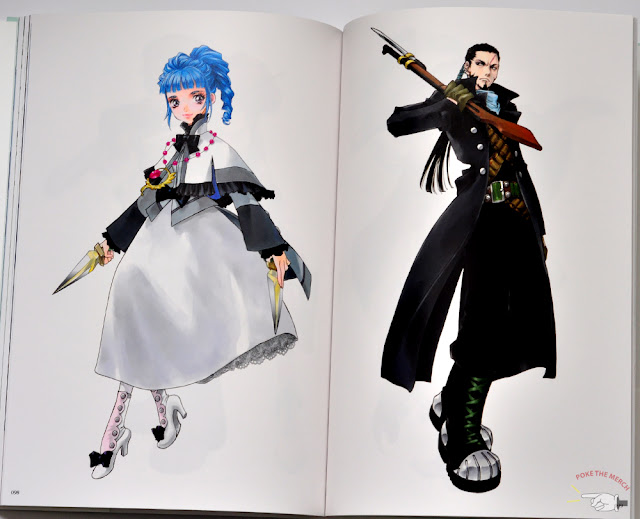 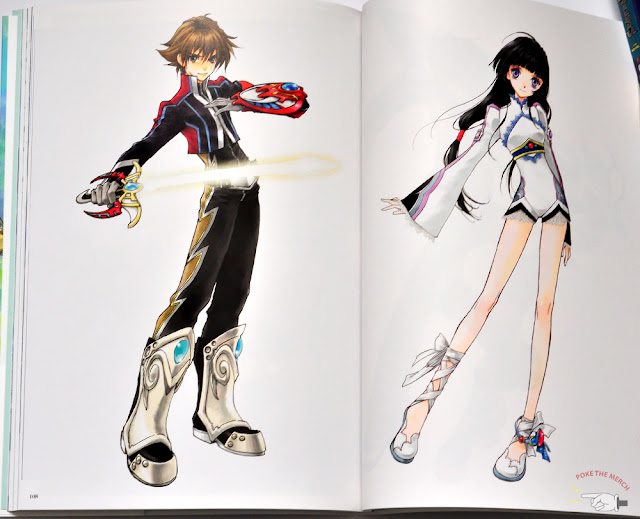 I admire Inomata's creativity.  Her style is unique and distinguishable, yet she's able to compose a variety of costumes and character designs for each game.  Some remind me of characters from a couple of previous games, sure, but the majority of them feel fresh.  I also love that her spreads and full-colour illustrations do provide me with a sense of fantasy. Her designs definitely translate well into game models and animated cutscenes. 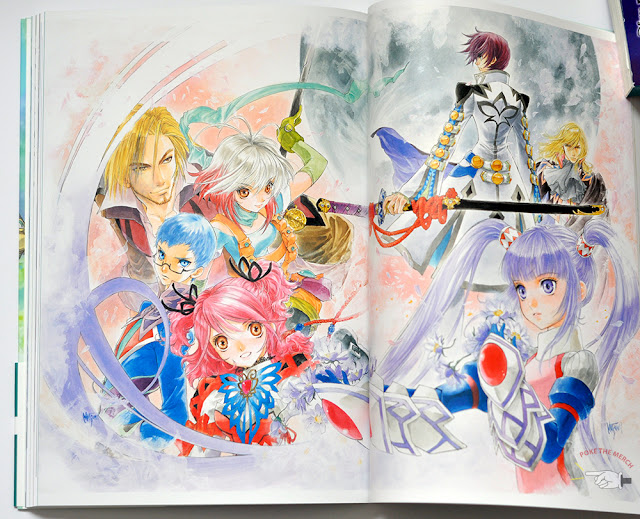 It's fair to say that the older games have far more illustrations than the later games. I must admit, I'm really disappointed in the fact that Tales of Xillia, Tales of Xillia 2, and Tales of Zestiria sections have little to offer compared to the other Tales of games. 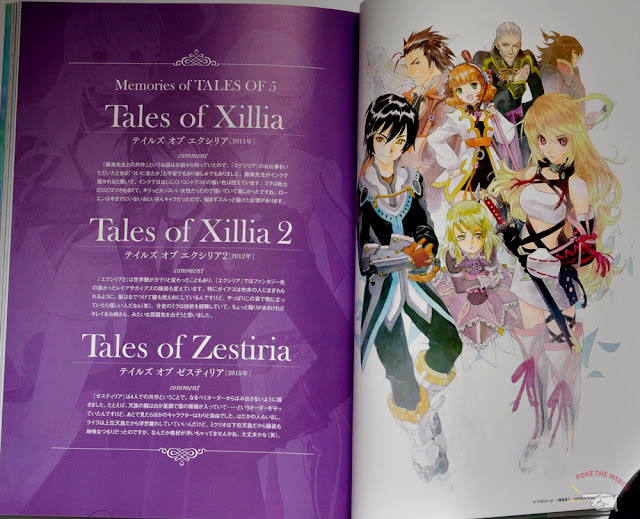 All we have in these sections are the main character illustrations and the cover designs used for each game. 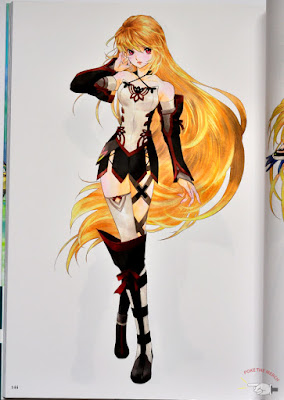 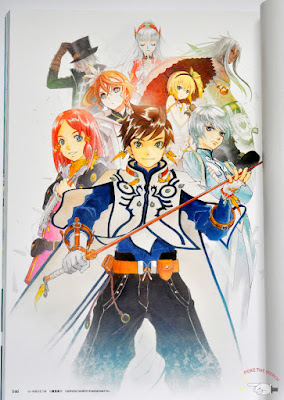 Perhaps it's because Inomata shared the spotlight as a main artist with Kosuke Fujishima, Daigo Okumura, and Minoru Iwamoto, but I'm bummed out nonetheless.  I love most of her designs for these three games, so it's a shame there are no extra pieces or spreads for them.  I had crossed my fingers for them originally, but evidently that was just me hoping for too much.  Even Tales of Tempest has a full spread and I'm aware that game didn't do very well in Japan.  That said, I'm still happy with my purchase since everything in this book is still splendid. 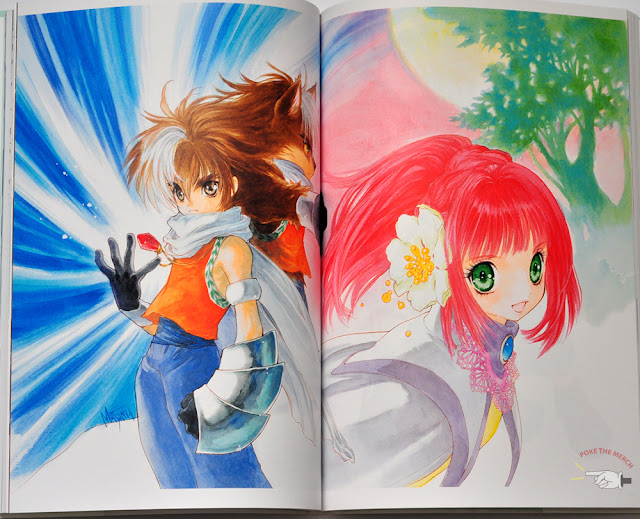 Finally, near the end of the book, we have novel illustrations and some rough sketches. Unfortunately, there isn't a lot in this section, which is a tad disappointing since this book is a collection of Inomata's works.  When it comes to rough illustrations, you would find more purchasing complete or perfect guides of each game, but here we have bits and pieces.  I would just consider them samplers.  They do look nice though. 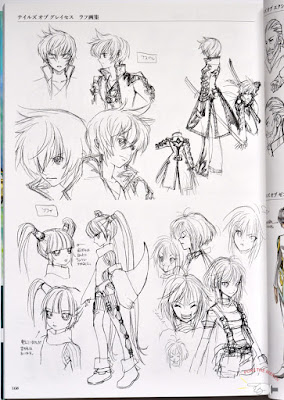 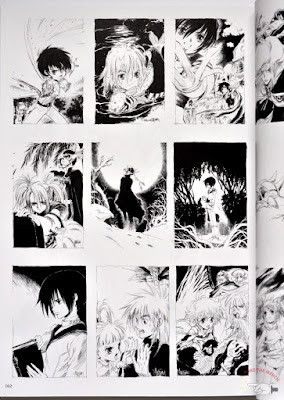 Would I recommend this to Tales of fans?  Despite the lack of illustrations from the more recent Tales of games, I still say absolutely!  The majority of illustrations are of high quality and bursting with colour, and any fan of the Tales of series would be proud to own this. 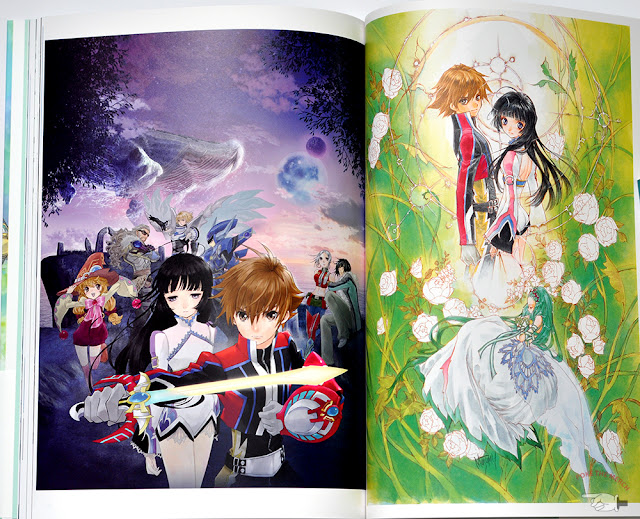 Should another Inomata artbook come out within the next 20 years, I'll be sure to buy it!  Who knows?  Maybe then there will be more illustrations for Tales of Xillia, Tales of Xillia 2, and Tales of Zestiria!  Now the question is... will Kosuke Fujishima release a Tales of book of his own?

Email ThisBlogThis!Share to TwitterShare to FacebookShare to Pinterest
Labels: Art Book, Artbook Review, Mutsumi Inomata, Tales of, Tales of Destiny, Tales of Hearts, Tales of Innocence, Tales of Rebirth, Tales of Series, Tales of the Tempest, Tales of Xillia, Tales of Zestiria