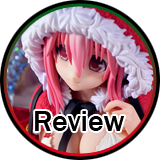 Finally, it's appropriate to review Santa swimsuit Sonico (stranger sentences are possible, but rare). See, I've had this Sonico kicking around since Alter decided to release her in May, but never bothered to take pictures of her, because a Santa hood would look too darn silly against a lush, green lawn.

When Alter announced they were finally jumping on the Sonico bandwagon, I did an unsuccessful backflip. Sonico and Alter? Talk about blowing my mind.

Seventh Dragon 2020 Miku is a prime example of an obligatory buy. With Max Factory's Samurai and Hacker already under my belt, was there any viable doubt I would add Idol Miku to the mix? None. Blame my rampant collector's mentality.

So, did collector's mentality result in a good purchase? Maybe. Maybe not. I speaketh no spoilers. Not in this preview, anyway. You'll just have to read on. 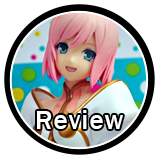 She's pink.  She's bubbly.  She's the princess of Zaphias!  Estellise Sidos Heurassein (or Estelle for short) makes an appearance at Poke the Merch as my first 1/8 scale figure!  Alter seems to be shelling out lots of Tales of series figures and thanks to Ash and her sister Lisa, I managed to get one of them!  It was hard to say no to Estelle because she looked incredibly sweet and lovely in the preview pictures.  And I must say, she looks just as lovely displayed on my desk.

Hello dear readers, Poke the Merch will be heading to Anime North 2014 and we're hoping to see you there!  Due to the success of our "Sinbad's Treasure" giveaway last year, we've decided to give more goodies out!  Be sure to find us on Saturday, May 24, 2014 to claim a piece of our merch!
Read more »
Posted by Jenn and Sui Chee at 21:05 3 comments

I'm not sure why it took me so long to pick up Max Factory's swimsuit Menma. I've been a fan of her unique look since the very beginning, but even when her resale price dropped to 3000 yen, I waited. What was I trying to prove? That I'm patient or something? How illogical.

So, after a year of staring at photos of her on the Internet (like an apex creeper), I finally threw up my arms and ordered her. Instantly, a thousand weights lifted from my shoulders. Hallelujah! 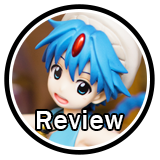 As a character, I found Aladdin really intriguing. On the surface he seems like a typical 'shounen-style' hero what with his sense of compassion and his being really hungry all the time. He's also a being sent to the world by a higher power to restore peace and unite the world. I assumed that he would act in a manner befitting such a protagonist. He would be the cool, righteous voice to the morally ambiguous deuteragonist, Ali Baba. Imagine my delight when I found out that wasn't the case at all. 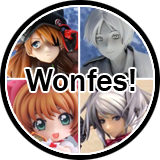 The following the a true to life reaction of Poke the Merch upon seeing Winter Wonder Festival 2014: "My god, it's ALL Kan Colle!"

We're not kidding. We might even be a bit traumatized. Sure, there were other figures here and there, but it was mostly Kan Colle. How one series became so dominate in terms of representation is a mystery to us. We suspect conspiracy (or overwhelming firepower). So we ducked our heads, peeled our eyes, and sought out the few figures brave enough to stand among the crush of personified war machines.

Hey all, it's been a while since I pumped out an artbook/doujinshi review! I have an explanation! I swear! 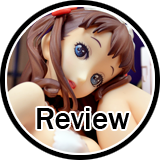 Wow, has it been a while since I last wrote a review, or what? My sincerest apologies to our readers for taking such a long, unannounced break. If I've learned anything, it's that life has a way of interrupting at the most inconvenient times!

That being said, I have a lot of figures to catch up on. Today we'll be looking a tone of Native's naked and creative ladies. She's lithe. She's twisty. She's Trunk Girl! Read on, O readers!

Hey-yo, all you gorgeous homo sapiens. Happy New Years to all! So another year has gone and what have we to show for it? Slightly fuller Detolfs and a basement full of cardboard boxes, that's what. If I sound bitter, I assure you, I'm not. After the insane year-long shopping spree I went on in 2012, I kicked my own butt and budgeted for 2013. If 2012 was the year of loose wallets, 2013 is the year of prude wallets. I set myself a stringent list of rules to reign my spending habits this year.